Big name companies make a killing every year by selling oils, candles, sprays and a variety of other products – often designed to reduce airborne odors in your home with a more desirable scent. These products don’t actually do anything to remove the odor or clean the air; instead they mask odors by adding perfumes and so-called neutralizers to the mix. While many of these products often smell nice, they are only adding to the problem, and in some instances make it worse. Odors caused by cigarette smoke and chemical fumes can best be removed by using a whole house air cleaner.

What is a whole house air cleaner?

Also known as an air purifier or air ionizer, air cleaners remove odors and clean the air throughout your entire home by removing odor-causing particles as well as any bacteria or viruses that may be inside your home. Whole home air cleaners are typically installed by a trusted HVAC contractor and work with your overall HVAC system.

How does a whole house air cleaner work?

When installed as part of your central heating and cooling system, the air cleaner works with the system so the cleansed air is distributed throughout your home more effectively. When compared to portable air cleaners, whole home air cleaners do a much better job of cleaning the air, and are much easier to maintain.

If you are struggling with stubborn airborne odors in your home, or you’re looking for effective ways to reduce the transmission of illness-causing bacteria and viruses, consider a whole home air cleaner. Pippin Brothers carries the industry’s leading line of whole home air cleaners and other indoor air quality products.

Do You Know Which Air Fresheners are Toxic? 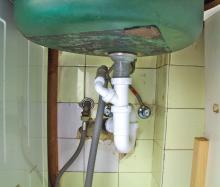