Fun Facts
1. The bread twist tie was invented in Maysville. (Blest be the tie that binds!)
2. The shopping cart was invented in Ardmore in 1936.
3. The nation's first parking meter was installed in Oklahoma City in 1935.
4. The first Girl Scout Cookie was sold in Muskogee in 1917.
5. Cimarron County, located in the Oklahoma Panhandle, is the only county in the U.S. bordered by 4 separate states - Texas, New Mexico, Colorado & Kansas.
6. The Oklahoma State Capital is the only capital in the U.S. with working oil wells on its grounds.
7. Boise City, Okla., was the only city in the United States to be bombed during World War II. On Monday, July 5, 1943, at 12:30am., a B-17 Bomber based at Dalhart Army Air Base, Texas, dropped six practice bombs on the sleeping town, mistaking the city lights as target lights.
8. WKY Radio in Oklahoma City was the first radio station transmitting west of the Mississippi River.
9. The nation's first "tornado warning" was issued March 25, 1948 in Oklahoma City minutes before a devastating tornado. Because of the warning, no lives were lost.
10. Oklahoma has the largest Native American population of any state in the U.S.
11. The name 'Oklahoma' comes from two Choctaw words – okla meaning "people" and humma meaning "red." So the name means, "Red People." The name was approved in 1890.
12. Oklahoma has produced more astronauts than any other state.
13. Oklahoma has more man-made lakes than any other state (including Caddo County's Fort Cobb Lake).
14. During the "Land Rush," Oklahoma City and Guthrie went from vast, open prairie to cities of over 10,000 in a single day.
15. The nation's first "Yield" traffic sign was erected in Tulsa on a trial basis.
16. The Pensacola Dam on Grand Lake is the longest multi-arched dam in the world at 6,565 feet.
17. The Port of Catoosa (just north of Tulsa) is the largest inland port in America.
18. The aerosol can was invented in Bartlesville.
19. Per square mile, Oklahoma has more tornadoes than any other place in the world.
20. The highest wind speed ever recorded on earth was in Moore Okla., on May 3, 1999 during the Oklahoma City F-5 tornado. Wind speed was clocked at 318 mph.
21. The Will Rogers World Airport and the Wiley Post Airport are both named after two famous Oklahomans, both killed in the same airplane crash.

Oklahoma Towns Offer It All

There's A Town Named After A Number:
Fourty-One, Oklahoma

And A Town Whose Letters Don't Spell Anything:
IXL, Oklahoma

For The Sportsman Who Wants To Get Away From It All...
Fisherman's Paradise, Oklahoma

We Even Have A City Named After Earth's Only Satellite!
Moon, Oklahoma

And A City Named After Our State!
Oklahoma City, Oklahoma

And Regardless What Side Of The Fence You're On...
Gay, Oklahoma
Straight, Oklahoma

$25 Off a Service Repair
Learn More
Sealing Your Home Envelope: The First Step Towards a More Efficient Home

Increase the Value of Your Home 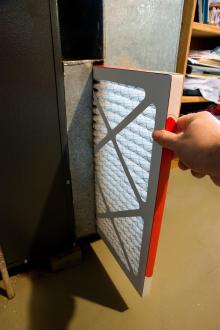